You are the treasury manager of FlyAir Airlines, a low cost long haul airline based in the Far East. Your Chief Executive Officer (CEO) has just presented you with the  newspaper article ‘Fuel Hedges Seen Hurting Airlines’, which he has recently read. .

INVESTORS from Sydney to Mumbai cheered the plunge in crude-oil prices, sending Asian airline shares to their highest level in three years. The bad news is several carriers could end up losing money from the sudden drop.

Some Asian carriers, like Singapore Airlines Ltd (SIA), have hedged fuel at an average of US$116 (RM402.52) a barrel of jet fuel, when spot market rates are about US$85. That can result in losses on paper as airlines will have to account for their hedges or pay charges to unwind contracts prematurely.

Oil’s dramatic decline in the past month is a replay of events in 2008 and 2009, when Hong Kong-based Cathay Pacific Airways Ltd, Chinese carriers and SIA all reported millions in losses because of bets on fuel. An inability to take advantage of a drop in their biggest expense also means airlines may be reluctant to cut fuel surcharges and lower ticket prices for consumers.

“It’s like going to the casino,” Mark Clarkson, a Singapore-based business development director at OAG Aviation, said about hedging. Potential losses sometimes could be much bigger than at a casino, he said.

Brent and West Texas Intermediate crude fell 18 per cent last month, the biggest monthly decline since November and December 2008, after the Organisation of Petroleum Exporting Countries maintained its output, opting to force United States shale gas producers to cut supply. Oil prices are hovering around the lowest in five years.

Jet-fuel swaps in Singapore slumped 13 per cent last month, according to data from PVM Oil Associated Ltd, a London-based broker. The price fell 4.6 per cent to US$83.50 a barrel on Saturday, the lowest since August 2010.

Jet fuel is the biggest expense for most Asian airlines, accounting in some cases for as much as 50 per cent of total costs.

SIA hedged 65.3 per cent of its fuel needs in the six months to March at an average price of US$116 a barrel of jet fuel.

“We do have hedges in place. And that’s going to mute the effect of lower fuel prices,” Stephen Barnes, SIA’s chief financial officer, said at an earnings briefing November 7. “On the other hand, it will protect our earnings from the full effects of a bounce if that were to happen.”

Six years ago, when crude prices plunged more than 50 per cent, it pushed Cathay Pacific into its first annual loss in more than a decade.

Its finance director Martin Murray said in August that the airline hedged 44 per cent of projected fuel needs for next year at US$101 a barrel of Brent crude, and 25 per cent of its needs for 2016 and 2017 at US$99 a barrel.

“The benefits are more skewed toward those who have low hedge coverage,” said Timothy Ross, the head of Asia-Pacific transport research at Credit Suisse Group AG.

About 70 per cent of the fuel that Qantas will need to use in the six months ending June will be bought close to spot prices, McGinnes said by e-mail. He said the remainder will be priced between current levels and the higher prices seen prior to September.

Asiana, South Korea’s second-biggest carrier, has increasingly bought its fuel at spot prices since 2011 and has this year hedged 8.4 per cent, according to Lee Hyo Min, a spokeswoman. China Eastern Airlines Corp doesn’t hedge, said James Wang, a spokesman for the Shanghai-based carrier. Bloomberg 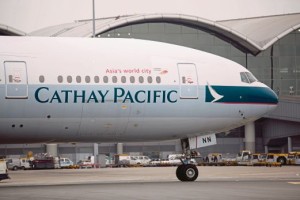 Cathay Pacific posted its first annual loss in more than a decade when crude prices plunged more than 50 per cent six years ago. Bloomberg pic

You have for many years been hedging your exposure to fuel prices and on reading the article the CEO became concerned that such a policy was costing the airline money.

Draft a response to the CEO outlining the arguments for and against your company engaging in hedging its exposure and recommend what the future policy should be.

Why firms in the UK use interest rate derivatives

UK Corporate use of derivatives