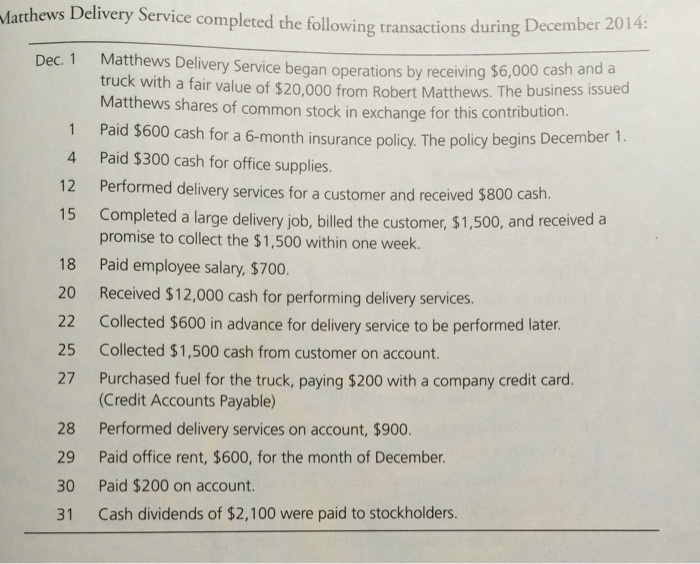 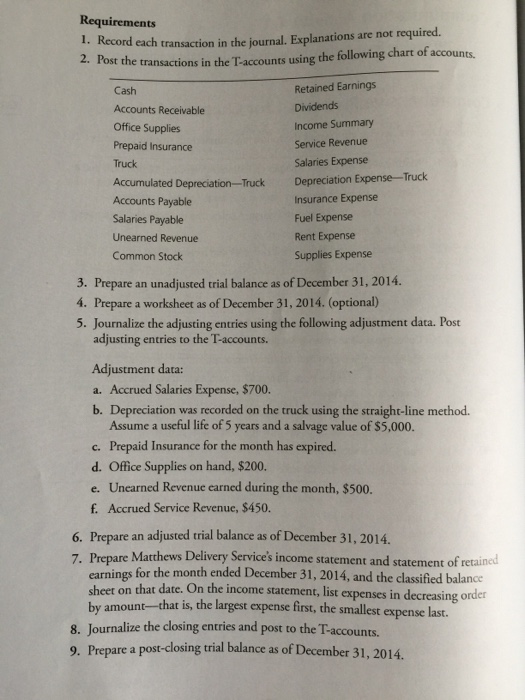 Text: Matthews Delivery Service completed the following transactions during December 2014: Dec. 1 Matthews Delivery Service began operations by receiving $6,000 cash and a truck with a fair value of $20,000 from Robert Matthews. The business issued Matthews shares of common stock in exchange for this contribution. 1 Paid $600 cash for a 6-month insurance policy. The policy begins December 1. 4 Paid $300 cash for office supplies. 12 Performed delivery services for a customer and received $800 cash. 15 Completed a large delivery job, billed the customer, $1,500, and received a promise to collect the $1,500 within one week. 18 Paid employee salary, $700. 20 Received $12,000 cash for performing delivery services. 22 Collected $600 in advance for delivery service to be performed later. 25 Collected $1,500 cash from customer on account. 27 Purchased fuel for the truck, paying $200 with a company credit card. (Credit Accounts Payable) 28 Performed delivery services on account, $900. 29 Paid office rent, $600, for the month of December. 30 Paid $200 on account. 31 Cash dividends of $2,100 were paid to stockholders. Record each transaction in the Journal. Explanations are not required. Post the transactions in the T-accounts using the following chart of accounts. Prepare an unadjusted trial balance as of December 31, 2014. Prepare a worksheet as of December 31, 2014. (optional) Journalize the adjusting entries using the following adjustment data. Post adjusting entries to the T-accounts. Accrued Salaries Expense, $700. Depreciation was recorded on the truck using the straight-line method. Assume a useful life of 5 years and a salvage value of $5,000. Prepaid Insurance for the month has expired. Office Supplies on hand, $200. Unearned Revenue earned during the month, $500. Accrued Service Revenue, $450. Prepare an adjusted trial balance as of December 31, 2014. Prepare Matthews Delivery Services income statement and statement of n earnings for the month ended December 31, 2014, and the classified balance sheer on that date. On the income statement, list expenses in decreasing or by amount-that is, the largest expense first, the smallest expense last. Journalize the dosing entries and post to the T-accounts. Prepare a post-closing trial balance as of December 31, 2014.

You're viewing: Matthews Delivery Service Case $7.50
Purchase The Solution
For a quality, original, and unique paperClick Here to Make a Custom Order
+ +